As 2017 drew to a close Facebook made sure we didn`t rest on our laurels by making a no-nonsense announcement that every business owner using the platform should sit up and take note of.

As we all attempt to get our posts, our content, our services and products, seen by our audience I am sure you have tried various tactics and tricks to try and beat Facebook`s complex algorithm. BUT Facebook are not going to tolerate it anymore and you could end up in Facebook jail if you`re not careful!

Previously, Facebook have been quite open by explaining the key factors in your audience seeing your updates. Basically, we all knew that the higher the engagement, the better your reach became. However, as some have tried to bend Facebook`s rules the social media giant has said “No more!”

They have announced that they will blacklist some popular methods to entice engagement…I think it is important that you know exactly how your posts and even your page could earn yourself a place on Facebook`s naughty step. Yes, you read that right…Facebook, from now on, will not only restrict your updates if you break their new rules, they will also restrict your business page if you consistently attempt to bend the rules. So play nicely, or else!

Facebook has looked at 5 different types of engagement bait which they feel are taking advantage of their News Feed algorithm to try and earn a bigger reach with their engagement. These are the 5 tactics that Facebook could deem as trying to bend the rules.

Yes, we`ve all done it, yes even you looking innocently down at your feet!

Since 2016 when Facebook reactions were introduced they have been popular with marketers because of their sheer potential for helping to increase engagement on your posts. If you`ve tried anything like the following (or if you are still posting the following) then you need to STOP now! 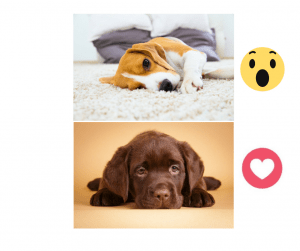 Many have used images like the above example to gain engagement by asking their followers to vote on an informal poll that has absolutely no relevance to the business page. Facebook will now punish you for this. Asking your audience to vote on the cutest puppy will not work, especially if your page has no relevance to dogs or puppies!

Plus, the reaction has to associate with the image, for example, asking people to choose the `Angry` reaction for a cute puppy isn`t going to cut it!

If you`re going to run a poll then at least make sure the reactions relate to the content, does that make sense?

Shares are exactly what we are all after isn`t it? After all, each Share will increase your reach and expand your audience and visibility of your post.

So, is that the end of asking people to Share your posts?

Not necessarily. You can still do that but it should be because the content is useful, educational and relevant. For example, tips, advice, etc. Asking people to Share a tip or piece of advice relevant to your page will be ok.

Tagging people in images is fine, as this helps identify the subjects in that image. What you CANNOT do is ask people to Tag a friend in an image that isn`t actually an image of them. It doesn`t stop there…

Asking people to Tag others in the comments of an update is classed by Facebook as low-quality comments and seen as trying to trick their algorithm. This will also earn you a custodial sentence in Facebook jail.

Facebook has not actually said that tagging people will affect your reach in a negative way, but if you`ve been using this tactic on your images and updates to gain attention and engagement then I`m afraid you could be on very thin ice as far as Facebook are concerned.

This is linked to the first point we touched on, Poll Baiting.

React Baiting is very similar in that you are instructing others to use the reactions that are not associated with their intentions. For example, using the image below 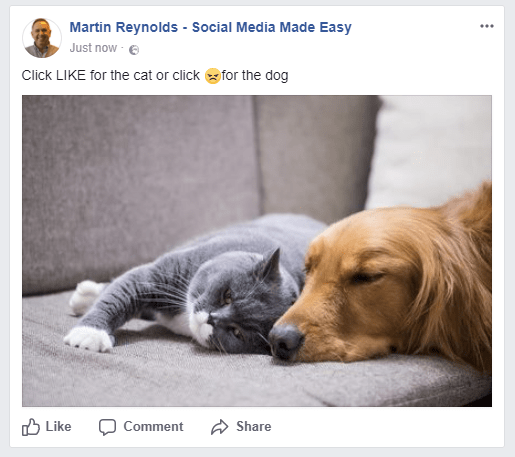 As with Poll Baiting, Facebook would have a problem with this in that you are asking your audience to use a reaction that is not associated with their intent.

Self-explanatory really if you`ve been following me so far.

What I am asking for in this post is not really insightful or a relevant comment to what I do or offer. (By the way the examples shown were all drafts and never posted solely for this Blog, before you ask!!)

My aim with this post was to try and gain as many comments as I could to help increase my reach and engagement.

As you can see, all 5 types of posts trying to solicit engagement all have something in common. Each one is attempting to gain engagement, albeit in a different way. They are asking you to use one of the features that Facebook offer that is not necessarily relevant and are trying to gain an advantage.

Facebook want your experience as a user to be a good one and they do not see any of the 5 types of baiting as relevant, helpful, interesting or educational for you as a user of their platform.

So, to counteract this…

Quite simply, updates and posts that are asking people for help, advice or recommendations. As you will have seen over the last year Facebook have actively encourage recommendations within posts. So, asking people to Share a post about a missing child or pet, raising money for charity or asking for tips will not be seen as engagement baiting by Facebook.

To sum it all up…If you are posting genuine, original and interesting content and not using any of the 5 tactics as mentioned above then you will have nothing to worry about.

It all comes down to creating and posting relevant content that you are sure will be of interest or helpful to your audience.

Let me know what you think or if you have any questions please feel free to get in touch.

Join my Closed Facebook Group and don`t miss a trick or tip!