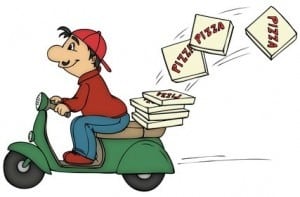 A course I attended some years back presented by a social media “expert” advised me to try being funny to provoke engagement, as of course engagement will help your Edge Rank within Facebook.

So I set about looking for humourous ways to entice people to interact, to like my posts and to reply…oh and did I get some replies!

The first few statuses worked and people were liking my posts here, there and everywhere. And then it happened…this is where it all went downhill!

I decided that a post about today`s society would provoke a reaction and many would see the funny side, and I can remember the post as if it was only posted today, so here it is…“Why is that we live in a world today where the pizza delivery turns up before the police?”

A comment that made my post backfire spectacularly from a young lady who commented that it was “nice to see that I was supporting our local constabulary”. I quickly replied that this was not a dig at the police force but in society in general and in a round about way was supporting the police to point out that government cut-backs had prompted this post. A prompt reply then suggested that the next time I need to call 999 in an emergency perhaps I should call Domino Pizza instead!

Yes I had a fantastic image in my head of a scooter carrying pizza delivery boy chasing my would-be burglar down the road with boxes of 9″ Hawaiian and 12″ Meat Feasts flying from his moped as he negotiated the speed bumps!

However this image soon disappeared as I messaged this young lady privately apologising for any upset caused and a normal conversation continued between us where she apologised to me. It turned out her and her husband were both serving police officers and she had just come off a particular gruelling night-shift only to see my post on her Facebook wall. Hence her comments.

So my point is, does humour really work on Facebook or any other social media come to that?

My suggestion would be to stick with useful, educational and interesting posts and leave the comedy to the stand-up comedians who make a living from it. However I would love to hear your thoughts and even your experiences of trying to be funny on Facebook.

Right I`m off to order a pizza, now what was the phone number again?…999?

Have any questions? Leave us a message
×